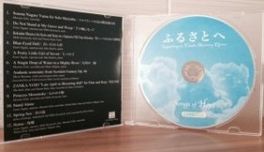 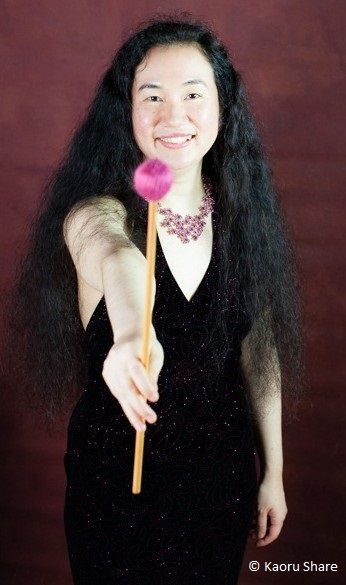 Marimbist / Conductor / Multi-Media Artist, Memmi Ochi, has diverse musical interests and vast performance experience.  As a marimbist, Dr. Ochi has presented concerts and recitals in the United States, Japan, Peru, and Holland.  Her appearance in Lima, Peru as the international guest artist at the international vibraphone and marimba festival, Vibraciones, has resulted in a return invitation from the Conservatorio Nacional de Música.  She sings and plays music in many different styles including classical, contemporary, pop, jazz, Caribbean steel drum, Venezuelan gaita, traditional Indian Dhrupad, and Gregorian chant.  Dr. Ochi’s training has been in percussion performance, and she received a Bachelor of Music from Western Washington University and a Master of Music and Doctor of Musical Arts in Percussion Performance from the University of Washington in Seattle, WA, USA.  While she was at the University of Washington School of Music, she is the first marimbist ever to win their concerto competition.  As Professor Tom Collier’s last teaching assistant, she taught private lessons, co-directed the UW Percussion Ensemble and coordinated their trip to perform at the Northwest Percussion Festival at the University of Oregon, assisted in hosting the new faculty candidate visits to campus, and helped organizing Professor Collier’s retiring celebration events.

As a conductor, Dr. Ochi has directed the UW percussion ensemble, the Ad hoc chamber choir, the Evergreen Glee Club, and the Japanese choir at the Japanese Baptist Church.  She has appeared as a conductor at Meany Studio Theatre, Safeco Field, and Seattle Center among other performance venues.  Dr. Ochi studied voice with Dr. Carol Sams and conducting with Dr. David Wallace and Dr. Leslie Guelker-Cone.

Dr. Ochi served as a committee member for the Songs of Hope, a Seattle-based organization to support the Japan Disaster Recovery effort.  Her responsibilities include planning major fund-raising events and performing at those events.  In 2011, she conducted the Chorus of Hope, a community memorial choir of Japanese speaking residents of the Greater Seattle Area who gathered to sing for the first anniversary of the Great East Japan Earthquake.  Performing roles at more recent events include a guest appearance with the Dream Vision, a recital, and an invocation.

In addition to her performance activities, Dr. Ochi is also a teacher and an author.  She served as a guest lecturer for the Northwest Mallet Camp and as a faculty member at the Icicle Creek Youth Symphony.  She also gives private marimba and percussion lessons. Dr. Ochi taught First and Second Year Japanese as a Teaching Assistant for the Japanese Program in the Department of Asian Languages and Literature, where she was awarded the “distinguishing Teaching Assistant Award,” selected by the nomination of students and faculty members.  Dr. Ochi’s dissertation, "One Hundred Years of the Concert Marimba: American and Japanese Innovation and Convergence, 1915 to 2014," a result of a 7-year in-depth research conducted both in the United States and in Japan, is in a process of publication.  Finally, Dr. Ochi is working to complete a Japanese translation of Bart Quartier’s marimba method book Imagine, which will be published through Norsk Musikforlag in Norway.